Good
Tormund Ellis[1] is a yellow Lupe seen in Neopets: The Darkest Faerie on the PlayStation 2. He wished to be a knight.

Tormund was born in Meridell Acres, a village in the realm of Meridell. His father Hubert is the mayor of the village, his mother Patricia is a gardener, and his sister Lucy herds Whinnies. When Tor was sixteen, his father asked him to deliver a package to Meridell, and entrusted to him a wooden sword for self-defense. Along the way there, Tor came upon an old old beggar being harassed by thieves, and came to his aid. As thanks for helping him, the beggar gave Tor a mysterious amulet, advising him never to take it off. Upon arriving in Meridell, Tor's package was stolen by a pair of thieves. After chasing them into an alley, they summoned some thugs to outnumber the young Lupe. Luckily, a mysterious knight came to Tor's aid, scaring off the bandits and Tor recovered the package. The knight complimented Tor's boldness to fight, despite being outnumbered and encouraged him to become a knight. Tor delivered the package but was presented with the opportunity to become a squire, which he took. But he had to fulfill some requirements first, such as getting a real sword, a shield, a knight to sponsor him, and finally a a signed paper of permission from his parents to become a squire. After obtaining a new sword, a shield, and gaining the sponsorship of the Man-at-Arms Tor returned home, hoping to convince his parents to sign his paper, only to learn his sister, having been upset that Tor had got to go to Meridell and she couldn't, had run off to find adventure in the dangerous Shadowglen Woods.

Tor journeyed to the woods, and found his sister in the viny clutches of a Juppie Plant monster. He saved his sister and took her home, whereupon his parents, convinced of Tor's maturity and bravery, signed his paper, and he returned to Meridell and was recruited as a squire. The Man-at-Arms put Tor through rigorous training, as well as set him up for chores around the castle, all of which Tor fulfilled calmly and respectfully, until he was given his first mission: To save a nearby village that was being attacked by Ixi Raiders. The knight Tor was supposed to accompany for this mission was more concerned with eating, and the Mysterious Knight appeared to encourage Tor to follow his heart, allowing Tor to find a loophole in his orders; he was never ordered to depart for his mission at the same time as the knight he'd been assigned to.

Tor set out to save the village from the Raiders, and even defeated their chief. Upon returning to the castle, the Man-at-Arms presented his young student to King Skarl, who promptly made Squire Tor into Sir Tormund (albeit a 3rd Class Knight).

Tor's moment however was interrupted by the arrival of a villager from Illusen's Glade, sent to seek help from the Knights of Meridell as the Glade was under attack by the Werelupe King and his forces, and that the Glade was overshadowed by dark purple clouds.

Despite not being ordered to go with the knights to investigate the matter, the Mysterious Knight warned Tor something was wrong, and sent him off with the promise he'd be along shortly.

Arriving at the Glade, Tor fought off Werelupes while saving the captured knights until he made his way up towards Illusen's chamber where the Werelupe King was confronting her. The King summoned his subordinate Gnarfas, a four-armed Werelupe wielding chains, to kill Tor. Tor fought off Gnarfas but was briefly overpowered before the Mysterious knight arrived to save him and defeat the beast. But the Knight was struck down by the Werelupe King, who then stole Illusen's Charm and fled. Tor went to Illusen who told him to warn King Skarl of a coming evil before being possessed and chasing him off.

Tor returned to Meridell to find the same purple clouds overhead the castle and Dark Knights patrolling the streets. He made his way inside and spied into the throneroom to find King Skarl was under a spell and the throne occupied by the Darkest Faerie he'd ever seen, chatting with three Dark Faeries about her plan. She noticed Tor and was interested to see he wasn't bewitched by her evil magick, ordering her three disciples to kill him but bring her what was left of the body when they were through. Tor barely escaped the castle with his life, with the help of the Cleaning Lady, who directed him to a pipeline that went out to the moat.

Tor eventually drifted out to sea but came back ashore, where he met an Acara named Roberta, who said she'd fallen from Faerieland, which had been conquered by the Darkest Faerie, and they were surprised to see they both had amulets that looked exactly the same. They were then attacked by the Darkest Faerie's minions, but fought them off, Tor with his sword and shield, Roberta with her magic spells. Agreeing to head to Brightvale, ruled by Roberta's uncle and Skarl's brother, King Hagan, they would soon relate the terrible facts to Hagan about Fyora, the purple clouds, etc. But they lighten the situation by explaining their amulets grant them immunity to the cloud's influence, and after convincing Hagan of Roberta's skills as a sorceress, the king charges them to find a way to end this threat (with Hagan telling Tor to take care of his niece). In the castle library, the duo learn that the Darkest Faerie once helped found a kingdom called Altador but turned to evil and destroyed it. She was stopped by Queen Fyora, who used her wand to defeat her, and gave her wand to an ancient king of Meridell. The wand was given a place of honor in the Meridell Treasure Vault, which was lost after a flood.

Upon leaving Brightvale, Tor and Roberta are confronted by an assassin sent to kill them by the Darkest Faerie, but he decides to postpone the deed simply to have more fun, and disappears.

The duo overcome many obstacles in their quest while also freeing the realms of Brightvale and Meridell from the purple clouds, gaining tools or artifacts to help them.

Using the Cloak of Heroes as a disguise, the heroes find a hideout of bandits and thieves, who, in exchange for the Treasure of Marketstown, give them a route to the Treasure Vault beneath the castle. They find the vault and recover Fyora's Wand, and make their way into the castle. They defeat the three Dark Faeries, Vanity, Malice, and Spite, and free King Skarl and Meridell from the purple clouds.

With Roberta's Uni, they fly to Faerieland and fight their way to Fyora's chambers, to find the Darkest Faerie captured and Fyora free. They return to the Queen her wand but it's a trap; the Darkest Faerie had disguised herself and Fyora as each other to steal the wand.

Fyora however easily breaks free of her bondage and takes back her wand, resulting in an intense dual between the two faeries. Fyora instructs the heroes to activate a magical device, which opens a portal, but is captured and sealed inside a bottle.

Tor and Roberta awaken to find themselves in a strange place filled with statues. The mysterious knight appears and reveals himself to be King Altador, the leader of Twelve Heroes who all banded together to save a land from monsters and turn it into the Kingdom of Altador. The Darkest Faerie was a member of these heroes but turned evil. Altador was not destroyed but instead sealed in bubble of slow time, completely cut off from the world of Neopia. The only way to free Altador from the Darkest Faerie's magic was to awaken four of the heroes from their slumber as statues hidden in four separate places in the kingdom.

They succeed and learn that in order for Altador to return to Neopia, they must free Jerdana, another of the Twelve Heroes, and regarded as the greatest sorceress to ever live. They free Jerdana, who is revealed to be the old woman who gave Roberta her amulet, and was the one to send one of the heroes, Kelland, disguised as the old begger, to the twin amulet to Tor.

She gives them a magic pendant called Jerdana's Orb, which was used by Fyora long ago to turn the Darkest Faerie into stone to be imprisoned at the bottom of the Maraquan sea.

Jerdana returns Tor and Roberta to the same moment they left, and witness the Darkest Faerie use Fyora's wand to cause Faerieland to fall from the sky, whereupon it would fall on Meridell, making the Darkest Faerie to be remembered as the one who destroyed two kingdoms at once. Luckily, the pair defeat her and use the orb to turn her back into stone and Fyora saves Faerieland with her wand and also saves Meridell from being obliterated.

Tor and Roberta are honored by Faerieland, Meridell, Brightvale, and Altador for everything they've done, and are called true heroes of Neopia.

Roberta asks Fyora what became of the Darkest Faerie, and it is revealed she has been placed as a fountain decoration to be kept an eye on.

Tor is a trained knight in swordsmanship. and by using motes, Tor can cast magic spells of his own that strengthen his sword attacks. 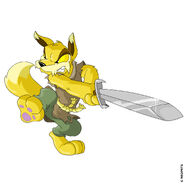