Lutari Island was a location in Neopia on Neopets. Lutari Island was a tropical island on the other side of Neopia filled with Lutari. Released on June 24, 2006, Lutari Island was similar to Mystery Island in that its inhabitants and land it filled with wild colours and natives. It's a very mysterious island, as it's not rooted to the ground, but floats from place to place, never in the same place. The weather is currently stormy everyday.

Lutari Island was an exclusive island available only to users who pay for Neopets Mobile offered by In-fusio. As of June 2010, Lutari Island can no longer be accessed due to the mobile service being taken down. After all that playing on the phones and Coco Roll avatar collecting, Neopets Mobile will be down for several months. The Lutari will be back with all new stuff, as well as your favorite paint brush from Lutari Island later this year! Check back again soon to see when they will be back to be earned!

" A mysterious island floats around the oceans of Neopia. It's never in the same place twice, which makes it quite difficult to track, and all the more intriguing. The mysterious island of Lutari is currently being pummeled by an unusually large storm! Between the whirlpools, water spouts and lightning it has been advised that no Neopets are allowed to visit its shores. Even the sea life seems to be staying away.. "

Many users feel it's unfair to have Lutari Island only available to Neopets Mobile users, which can't be had because of the cost or the lack of a Cingular cellphone, similar to the way some users don't have Neopets Premium. Unlike Neopets Premium, however, Lutari Island is located on the map. The fact that the Lutari themselves can be neither traded nor pounded is also irksome. 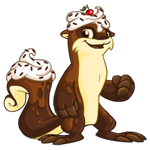 Add a photo to this gallery
Retrieved from "https://neopets.fandom.com/wiki/Lutari_Island?oldid=39963"
Community content is available under CC-BY-SA unless otherwise noted.