Evil (formerly good according to the TCG and editorial)
Lord Kass is a Darigan Eyrie who served under Lord Darigan, before helping to defeat him, and then taking over the Citadel. He eventually became power-hungry due to the influence of The Three.

He is a Darigan paint Eyrie, which means he is dark purple with a black mane and red eyes. He is usually seen wearing regal armor.

Lord Kass was once one of Darigan's generals, and helped stop Lord Darigan from destroying Meridell after the orb corrupted him. Lord Kass then took over Darigan Citadel after Darigan was defeated, and fell under the influence of three malevolent spirits known as The Three, who prompted him to attack Meridell again, and corrupted him.

He was the main antagonist during the Battle for Meridell plot. He was defeated by Lord Darigan and the forces of Meridell, and when he failed to win the war, The Three seemingly killed him. 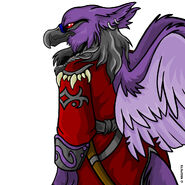