The faeries are an all-female race of magical creatures that inhabit Neopia. They were first introduced to the Neopets website on January 14, 2000. Faeries are humanoid in appearance and have slightly pointed ears. Some faeries will give quests to players, rewarding them for retrieving certain items. Players may also encounter Bottled Faeries, Faeries that have been captured by Balthazar, that will bless a Neopet if freed by them.

With the exception of the mermaid-like Water Faeries, all faeries have a pair of wings on their back that give them the ability to fly. If these wings are removed, the Faerie loses her power and becomes a Grey Faerie.

As magical creatures, Faeries are capable of changing their size from being larger than most Neopets, to being small enough to be caught in a bottle. Their size is also indicative of their power: large faeries tend to be more powerful faeries. Faeries have played roles as heroes and villains Neopian history: for example, the Space Faerie saved Neopia from Dr. Sloth's mutation ray, Queen Fyora imprisoned The Darkest Faerie for a thousand years, Psellia rescued Jeran during the Battle for Meridell. As discovered during the course of The Faeries' Ruin plot, the magic of the faeries keeps mysterious dark wraiths from invading the land.

Although they can be found in many places across Neopia, faeries are most readily encountered in Faerieland, a kingdom ruled over by Fyora the Faerie Queen. Faeries are known for holding a Faerie Festival each year on the 20th day of the Month of Gathering to create a sense of unity among all faeries. Each year, the festival is held in a new place depending on who the hostess is.

The most common faeries are associated with one of the six elements. The elemental faeries can control the forces of earth, air, water, light, fire and darkness.

There are also several unique faeries that do not simply belong to an elemental type.

Sometimes, an unfortunate faerie will be captured by Balthazar the bounty hunter and imprisoned in a small glass bottle. These bottled faeries act as tradable items on the Neopets website. They are sold at Kauvara's Magic Shop and are also sometimes given out as prizes for certain games, such as the Alien Aisha Vending Machine. If a Neopet releases a faerie from its bottle prison, the newly freed faerie will grant blessings to the Neopet that freed it. These blessings can then be used to purchase abilities at Aethia's Ability Academy.

Faeries sometimes give out quests to users via random events. During these quests, the requesting faerie will ask the user to find them a specific item without using the Shop Wizard or the Super Shop Wizard. If the user brings the faerie the requested item, the faerie will reward them for their hard work. There are currently thirteen type of faeries that give out quests. Each type of faerie requests a different kind of item and gives out a different reward.

In addition to this, users can also obtain separate, on-demand quests from Jhudora, Illusen, and Taelia. All quests obtained from these three faeries have strict time limits, but they also allow the use of the Shop Wizard. 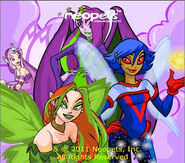 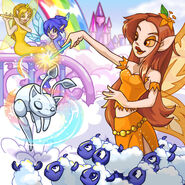